The Kayapo people are indigenous peoples in Brazil who inhabit a vast area spreading across the states of Pará and Mato Grosso, south of the Amazon Basin and along Rio Xingu and its tributaries. They are one of the various subgroups of the great Mebêngôkre nation (people from the water’s source). The term “Kayapo” is used by neighbouring groups rather than the Kayapo themselves. They refer to outsiders as “Poanjos”.

The Xingu River in Brazil

The Kayapo tribe lives alongside the Xingu River in the eastern part of the Amazon rain forest, near the Amazon basin, in several scattered villages ranging in population from one hundred to one thousand people in Brazil. Their land consists of tropical rain forest savannah (grassland) and is the largest tropical protected area in the entire world, covering 11,346,326 hectares containing many endangered species. They have small hills scattered around their land and the area is criss-crossed by river valleys. The larger rivers feed into numerous pools and creeks, most of which don’t have official names.

In 2010, there was an estimated 8,638 Kayapo people, which is an increase from 7,096 in 2003. Subgroups of the Kayapo include the Xikrin, Gorotire, Mekranoti and Metyktire. Their villages typically consist of a dozen huts. A centrally located hut serves as a meeting place for village men to discuss community issues.

The Kayapo use intricate black body paint covering their entire bodies. They believe that their ancestors learned their social skills from insects, so they paint their bodies to mimic them and to better communicate with the Spirit that exists everywhere. The black body paint also allows them to blend into their surroundings when hunting in the forests. To help find their way through the forest, the Kayapo paint their legs with red pigment that rubs off on the surrounding terrain. The colors that a Kayapo wears is representative of their tribe’s colors.

Older generations of Kayapo men wear disks in their lower lips, but the practice is less common among younger Kayapo men. The men adorn themselves with radiating feathers, representing the universe, in their hair. Kayapo men also can be seen with rope in their hair, to represent the rope which the first Kayapo used to arrive from the sky. Traditionally, Kayapo men cover their lower bodies with sheaths.

Due to increased contact with outside cultures, contemporary Kayapo often wear Western-style clothing such as shorts. Kayapo chiefs wear a headdress made out of bright yellow feathers to represent the rays of the sun. The feathers used in their headdresses are from birds native to their area such as hyacinth macaw and crested oropendola. The birds found in the Amazon are naturally bright-colored; the Kayapo do not dye the feathers.

Headdress worn in ceremonies by boys and men

Kayapo children wear cloth or beaded bands with colors representing their tribes. Typically these bands are tied below the waist or crisscrossed around the torso. When the child become of age, they go through a naming ceremony in which they wear large yellow headdresses. Kayapo women can be distinguished by the V shape shaved into their hair.

They speak the Kayapo language, which belongs to the Jê language family. The Kayapo are split into many groups, resulting in different dialects of their language. Beauty is valued highly in the Kayapo culture. A beautiful name is seen as a sign of wealth. The tribe will move and re-construct their camp in order to find the materials required to undertake the naming ceremony, sufficient food sources for celebration must be gathered and presented to the father of the new-born. The Kayapo possess varying knowledge of Portuguese, depending on the individual groups and their history of contact with outsiders.

The resource patterns of the Kayapo are non-destructive to the resource base but require a very large area of land. The Kayapo people use shifting cultivation, a type of farming where land is cultivated for a few years, after which the people move to a new area. New farmland is cleared and the old farm is allowed to replenish itself. The particular type of shifting agriculture employed most frequently by the Kayapo is the slash and burn technique. This process allows forested areas to be cut down and burned in order for cultivation of the lands to take place. These new fields peak in production of principal crops in two or three years but continue to reproduce for many years; e.g., sweet potatoes for four to five years, yams and taro for five to six years and papaya for five or more years.

Old fields are important for their concentration of medicinal plants. With the spread of indigenous groups, trail-side plantings and forest fields were also used for cultivating crops. Trails systems were extensive in the area and were used for transporting and growing crops along their borders.

The Kayapo use approximately 250 different food plants and 650 different medicinal plants that they find around their village. The type of sweet potato that forms an important part of the Kayapó diet is sometimes named “caiapo”, after the tribe. It is cultivated under that name in Japan, and has been found to have health benefits. They also have trade agreements with The Body Shop.

Logging within the rain forest of the Kayapo

The Kayapo have incorporated a great deal of traditional myth, ritual and cosmology into their practices honouring the importance of the earth’s relationship with the people. Threats to the forest home of the Kayapo have been an area of extreme concern in the last 30 years, beginning with mining and logging enterprises which threatened to destroy the rain forest, and thus the Kayapos’ way of life.

In the village of Gorotire, the Kayapo made a deal with prospectors that mining could take place as long as they received a percentage of the mining proceeds and had their territory divided. The gold mining operation was initially seen as a positive development, which brought money into the local economy. With money filtering into the economy, better housing, improved education and a resulting level of health were achieved. 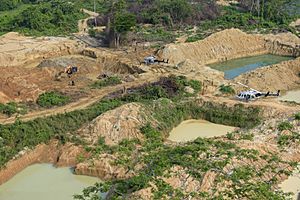 However, the initial benefits of mining also resulted in high levels of pollution in the area which seeped into water ways and nearby river banks and destroyed local fish populations with high quantities of mercury. In addition to striking environmental threats, social habits began to change with the introduction of outside influences in the area. This increased interaction with outside groups elevated the levels of disease, which posed an imminent threat to the people because of their relative seclusion and limited access to medical care. In addition, the reduced resource base caused conflicts between the Kayapo and neighbouring villages which often resulted in explosive and long standing disputes. The Kayapo people used forceful tactics to banish loggers and minersin some areas, as well as to establish themselves as an economic force.

In 1987, new land issues arose when the government proposed a series of hydroelectric dams to be built in the Xingu River area, namely the Belo Monte Dam. These dams were an imminent threat to the Kayapo with the potential to displace upwards of 20,000 people from their lands. Under the leadership of Paulinho Paiakan, the Altamira Gathering was orchestrated by the Kayapo, drawing media attention worldwide. This demonstration, staged at the planned site for the first dam in Altamira, Pará, lasted several days and brought much pressure upon both the World Bank and the Brazilian government.

The Altamira gathering brought the Kayapo, as well as other Brazilian Indians and their supporters into a forum where discussion could be had about how to protect the environment and the native peoples. The Kayapo demanded information that was being withheld by the government relating to the negative consequences for their people who would be directly affected by the construction of the dam, as well as rural Brazilians in the Xingu River area, who they felt were not receiving adequate and fair information.

Raoni in Paris, holding the international petition against the Belo Monte dam

The Kayapo continued to fight adversity and retaliated using traditional war oratory and dances. The Kayapo attended the meeting to protest the hydroelectric dam development while wearing traditional costume and wielding machetes. Perhaps the most dramatic single image to emerge from this gathering was that of Tuíra, a female indigenous leader, angrily waving a machete in the face of engineer José Antônio Muniz Lópes (later president of Eletronorte, the state power company in charge of the dam), which had worldwide repercussions and probably influenced further postponement of the project.

The Belo Monte Dam – the costs

An important media element of the presentations was the appearance of the rock star Sting during the demonstration. Sting would continue to support the Kayapo in their efforts to protect their land, and in 1989 he would found the Rainforest Foundation Fund. Three years later, the first privately funded separation of the Brazilian indigenous reserve was made possible. In 2008, they were again threatened by secretive government plans to build a series of hydroelectric dams on their land. The Belo Monte Dam resurfaced, and would be built on the Xingu River, the homeland to many Kayapo people. The Construction plans continue to be fought by the Kayapo people.

Government corruption continues to weaken the resistance efforts of the indigenous and opposition forces within the government. Kayapo leaders protesting the creation of the dam are constantly threatened, and some have been killed by developers and land prospectors. Because of the nature of the circumstances, these crimes are rarely punished.

Cacique Akiaboro, general leader of all Caiapó villages attending the 13th Ordinary Meeting of the National Commission for Indigenous Politics

The forest is the home of the Kayapo and they rely on its bounty for their food and medicinal needs. Rivers are essential to their way of life and gold mining in Brazil is polluting the rivers, while the proposed Belo Monte Dam project would use up vast amounts of resources essential to the survival and livelihood of the Kayapo and would severely impact fishing conditions.

Between 18,000-25,000 (indirectly associated) jobs will be created by the construction of the dam. These numbers will have a vast and far reaching implication on population growth in the area which has the very real potential to put even more pressure on the fragile forest infrastructure and ever decreasing natural resource base, escalating concerns of flooding and deforestation in particular.

Tags: Peoples of the world